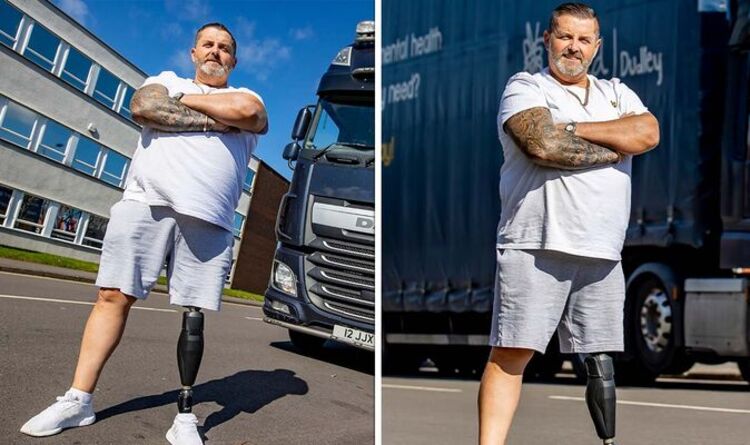 Mark Smith, 53, went to his GP several times in 2014 and 2015 with worsening blood clot symptoms, including pins and needles, leg cramps and discolouration, only to be misdiagnosed with bad workwear, according to Smith. His condition was finally identified as he was rushed into the operating room with one of his big toes looking “virtually black”.

While he was working as a HGV driver for a logistics company, something he had been doing for 30 years, Smith developed pins and needles that lasted for a couple of days.

His friend said it could be gout and recommended visiting the doctor straight away.But when he went to the GP, according to Smith, the “doctors weren’t interested” and “kept palming it off on the workwear”.

After just two weeks, he developed a stretching pain in his foot. He returned to the GP but was “palmed off” again.

And then after a few more weeks the bridge of his foot started aching “just like you dropped something on your foot”.

Still, there was no diagnosis. The symptoms kept getting worse until by March 2015, his leg was discoloured and he virtually couldn’t walk.

“No referrals [were] made, so I kept going to work. I was in dire pain. I never missed a day of work. I could hardly walk,” he said.

READ MORE: Vitamin B12 deficiency: A problem with understanding is a sign – other indicators

“One day I was in North Yorkshire, because I was a long distance lorry driver. And my big toe was virtually black. Really dark blue, black. And I phoned my wife and I said, look, my toe has gone black.”

In shock at his horrific symptoms, Mark rushed back to Dudley where his wife took him straight to the A&E Department at Dudley’s Russell Hall Hospital. When he got there, he was taken straight to theatre.

“As soon as they saw me at the hospital, they put the bands on my wrist, carted me upstairs and then it was a massive snowball ride,” he said.

In the end, Smith was given six surgeries and an amputation above his left leg and fitted with a prosthetic limb.

According to his medical records, which were retrieved by his solicitor at the law firm Shoosmiths, he had suffered a blockage of the left common femoral artery, caused by stenosis.

Smith, who is not diabetic, has “never been a smoker” and regularly goes to the gym, said he received a letter of apology from the practice, which said they had changed the “criteria” for treating people for blood clot.

A blood clot is caused when certain parts of your blood thicken, forming a semisolid mass, according to the Mayo Clinic.

This process may be triggered by an injury or it can sometimes occur inside blood vessels that don’t have an obvious injury.

It was during this period that he sought legal support from Shoosmiths. Smith sued the practice of the two doctors who misdiagnosed him for negligence, which admitted liability.

Using an interim settlement, he paid for mental health treatment and a top-of-the-range prosthetic limb.

He was given his final settlement in late 2021.

Smith was quick to thank Sharon, his solicitor for the work she had done, including her investigation into the two doctors and helping to organise his rehabilitation.

“Day to day life is good. It’s never gonna be as good as your own limb, but it’s close.

“They told me I would never drive again; doctors, other lorry drivers, coach drivers. They said, ‘You’ll never do it, just accept it and move on’.

“But all I wanted to do was get back to work. That was my mindset.“My father was in the army and he was a truck driver. My brothers and I were brought up with the attitude that if you get knocked down – you get back up again.”