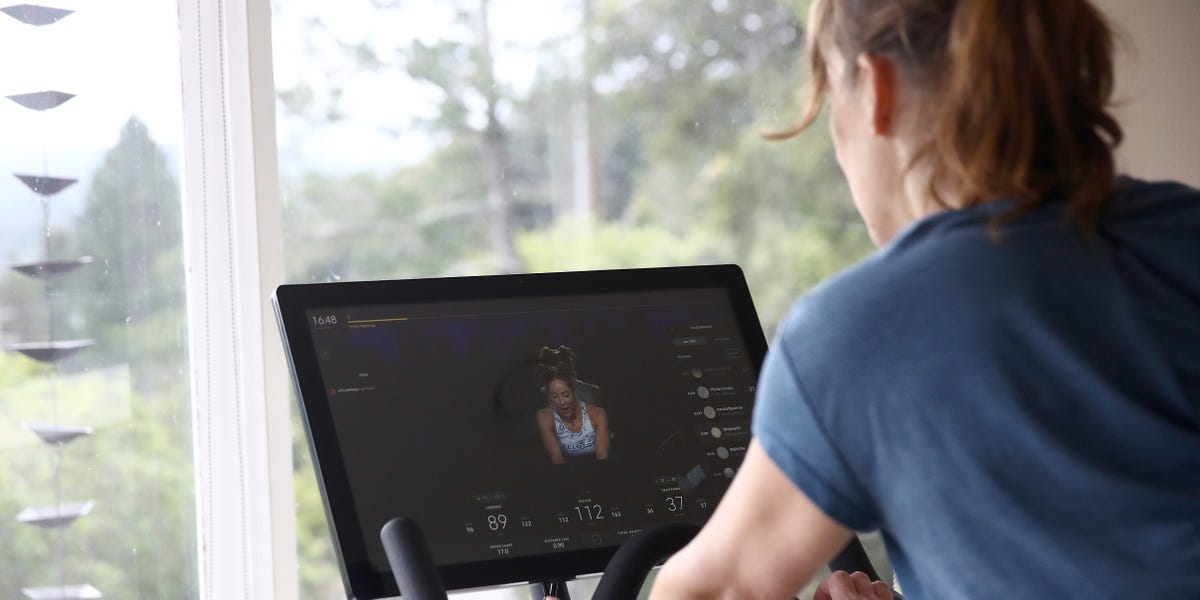 When Adeline Cheng wakes up, she checks the app on her phone that’s synced with the chunky titanium Oura ring she wears to bed. While she slept, the ring measured her breathing, heart rate, body temperature, sleep quality, and movement.

The Oura app displays her “readiness” score, meant to indicate how prepared her body is for activity that day. Combined with her “sleep” score and her “activity” score, Cheng is hoping for what’s called a triple crown, meaning all three scores are above 85. Sometimes she gets it, she said.

“I do work out quite a bit, so sometimes my body says I’m not ready,” she said. “And I’m not the greatest sleeper. That’s why I got the ring.”

This data-heavy morning routine is a relatively new one for the 40-something Toronto bank executive. In the last year, she said she was looking for a way to redirect the energy she previously focused on office life and social gatherings. Like more than 4 million other people, Cheng also picked up a Peloton habit.

“I think for a lot of people, health and wellness have become an important aspect of how they see themselves,” Cheng said.

The practice of tracking health metrics this closely, and purchasing the accessories to do so, has moved from locker rooms to living rooms over the last year. A category of apps, wearables, content, and workout equipment make up what’s known as the high-performance lifestyle (HPL) market, which has seen a boom during the pandemic as people with disposable income increasingly turned to tech to optimize their performance.

The last year has upended the the fitness industry’s status quo. Companies scrambled to keep up with the surge in at-home fitness, using artificial intelligence (AI) to offer personalized workouts and real-time feedback.

Fitness tech startups got the chance to snag a permanent foothold in the market. In 2020, they raised a record $2.3 billion, per CB Insights, a 30% increase from 2019. Several companies, such as fitness tracking app ​

Consider the popularity of Peloton, which saw monthly visits to its US site soar from two million in March 2020 to 10 million in November 2020, per Bank of America Research. An Oura spokesperson told Insider that ring sales doubled in the last year to a total of 300,000 since the company’s launch in 2018.

“Looking forward, as these devices, along with wearables and fitness apps, collect more data on consumers’ health and wellness, those that can use that data to create a more personalized, engaging, and effective fitness experience will be positioned to win,” he said.

This vast array of fitness companies collectively comprises the HPL sector. It spans several markets, according to Anthony and Joe Vennare, who are brothers, investors, and cofounders of Fitt Insider: The $13.5 billion self-improvement market, the $60 billion wearables market, the sports medicine market which is expected to surpass $9 billion by 2024, and the alternative medicine market which is poised to reach $296 billion by 2027.

Companies benefitting from this boom include health wearable providers such as Whoop, FitBit, Apple Watch, and the Oura Ring; quantified fitness equipment such as Peloton, Row, and Mirror;

meditation
apps including Headspace and Calm; and accessories like the self-cleaning Larq water bottle.

Once the purview of professional athletes and elite tech circles, products like these have merged with the realities of quarantine over the past year, bringing many people face-to-face with tech’s ability to measure our minds and bodies in new ways — and it can be addictive.

Patrick Schneider-Sikorsky, 39, who works in venture capital in London, said his group of friends shares screenshots of sleep scores with each other in a WhatsApp group.

“Getting competitive about sleep is a bit ridiculous,” he said. He catches flak for getting better sleep than his friends, despite going to bed later. “According to the Oura, I’m getting three hours of deep sleep every night,” he said. “And they’re like, ‘How is that possible? You’re going to bed after midnight, and I go to bed at like 11:00.'”

Though Wanfang Wu, 28, said he uses the Oura mainly to track his sleep quality, he originally bought it to detect early signs of COVID. While working from home in San Diego, he read it was being used in a trial at Stanford University. Oura has also received a boost from high-profile fans including Prince Harry, Bill Gates, Jack Dorsey, and the NBA.

“In my research for choosing a sleep tracker, the Oura ring was already on my radar,” Wu said. “But then once I heard about the COVID detection, and work-from-home happened, that’s what made me pull the trigger.”

Since purchasing the Oura, Wu has been focused on improving his sleep score, but he said progress has stalled. “I hover around 70%. I’ve been trying to increase that, to limited success.”

In addition to watching out for a life-threatening virus, many people have learned what lifestyle factors affect their sleep, and are tweaking their diet, alcohol consumption, and bedtime routines.

“The glasses have helped me fall asleep faster,” he said. “The curtains help me stay asleep longer, but my sleep efficiency has stayed the same — at 70. I am waiting to see if there are durable results from the mattress topper.”

Schneider-Sikorsky, who in addition to his Oura ring wears a Keyto breath meter, an Apple Watch, and an Abbott continuous glucose monitor, said he’s noticed the days-long domino effect one evening of drinking alcohol has on his glucose levels, which in turn increases his hunger. Sushi, he noticed, also makes his glucose levels fluctuate.

Justin Flowers, a 33-year-old biotech manager in San Diego, said he bought an Oura and a Whoop and took up running during the pandemic.

“I’ve learned a lot about my body from both devices,” he said, citing the impact of late-night exercise, blue light glasses, melatonin supplements, hydration, and the effects of alcohol. “These are all things that my Series 5 Apple Watch, which I also wear, can’t tell me.”

“I didn’t make those connections in normal real time, because I wasn’t getting a hangover,” she said. “I was ready for work the next day.” Now, she said, the Oura data will tell her that even though she may feel okay, her body is still struggling to recover.

“My ring told me this morning that I was delayed in readiness. And it said, ‘Did you have a late meal?’ I did. “It allows me to see how certain activities help me or hinder me for the day ahead,” she said.

The quantified self as a status symbol

Tech-health hobbies are something a small number of fortunate people have been able to do, said Elizabeth Currid-Halket, author of “The Sum of Small Things,” which charts the rise of inconspicuous consumption among the aspirational class.

She told Insider that while many people have been under enormous anxiety and stress during the pandemic, turning to the Calm App to meditate during this time is very different than a grocery store worker not being paid enough and risking their life on an hourly job, without the time to zen out for 20 minutes a day.

“Weirdly, even those things that we’ve taken for granted as just simply keeping us sane in this time are still luxuries of being well off,” she said. “They’re very discreet pandemic-focused lifestyle choices, to be in your best health.”

It’s a trend Currid-Halkett doesn’t see going anywhere post-pandemic. “Those are things that people have turned to that will remain helpful in our lives,” she said.

Cheng, the Canadian bank executive, recognizes this and admits she’s self-conscious about the Peloton bike, Oura ring, and Larq bottle she bought during the pandemic. “I do feel privilege guilt,” she said. “I appreciate that I’ve become a walking cliche for upper-middle-class people.”