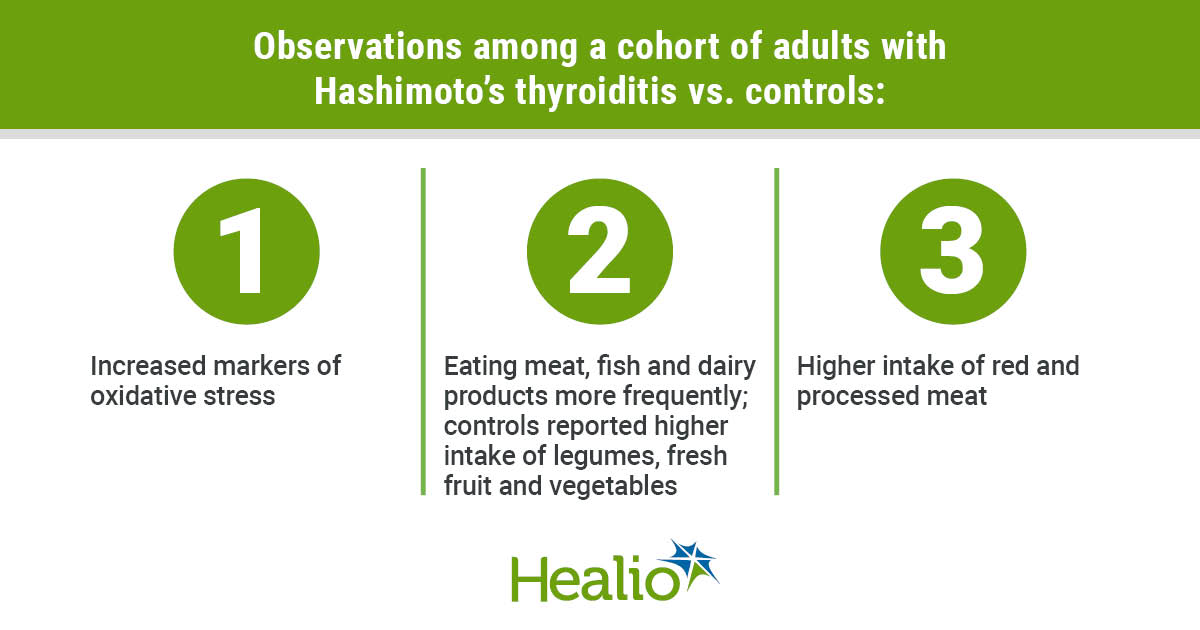 
Receive an email when new articles are posted on

Please provide your email address to receive an email when new articles are posted on .
We were unable to process your request. Please try again later. If you continue to have this issue please contact [email protected]

A cohort of euthyroid individuals with Hashimoto’s thyroiditis were more likely to eat meat and less likely to adhere to a Mediterranean diet than healthy controls, according to findings published in Thyroid.

Ruggeri and colleagues randomly recruited 200 voluntary adult participants through thyroid disorder awareness campaigns at the University Hospital of Messina (86.5% women; median age, 37 years). All participants were healthy, white individuals living in Messina, had stable dietary habits in the 5 years before the study, and had no history of pharmacological treatment, antioxidant agents or vitamin supplements 6 months before recruitment.

Participants provided their medical history, underwent a physical examination and thyroid ultrasonography, and provided a blood sample. A questionnaire was given to each individual on how often they ate meat, fish, cereals, fruits, vegetables and dairy products. Adherence to a Mediterranean diet was measured through responses to the 14-item PREDIMED questionnaire.

Of the study population, 81 participants were diagnosed with euthyroid Hashimoto’s thyroiditis through laboratory and ultrasound results. The 119 participants who had no evidence of thyroid disease served as the control group.

Those with Hashimoto’s thyroiditis reported eating meat, fish and dairy products more frequently than the control cohort, whereas controls reported higher intake frequencies of legumes and fresh fruit and vegetables.

“The current study provides the first evidence of a protective role of the Mediterranean diet also against thyroid autoimmune disorders,” the researchers wrote. “It is conceivable that adoption of this dietary pattern could also be protective against autoimmune disorders, counteracting the deleterious effects of oxidative stress and exerting anti-inflammatory and immunomodulatory actions, most likely by affecting cytokine production and gut microbiota composition.”

“Reducing the intake of animal proteins and fats and increasing that of plant foods may represent a useful lifestyle strategy for reducing the risk for autoimmune thyroid disorders,” the researchers wrote. “In particular, a predominantly plant-based Mediterranean diet may represent a healthy food model in the setting of autoimmune disorders.”

This case-control study with 200 healthy Italian adult volunteers found that greater adherence to a Mediterranean diet, decreased intake of animal foods, and higher intake of plant foods were associated with decreased thyroid autoimmunity. The study authors postulate that this protective effect may be mediated by decreased oxidative stress.

Participants were recruited from volunteers in a thyroid disorder awareness campaign. It is striking that, despite the exclusion of individuals with thyroid dysfunction or a known history of other autoimmune disorders, 40.5% of study participants were found to have Hashimoto’s thyroiditis based on TPO antibody positivity and/or ultrasonographic findings. This is far higher than the expected population prevalence. Although not ascertained, it is possible that some individuals who chose to volunteer for the awareness campaign may have been motivated by a family history of thyroid disease or other autoimmunity.

The region of the study is considered mildly iodine deficient. Self-reported use of iodized salt did not differ between cases and controls, but urinary iodine concentrations were not measured. One diet-mediated mechanism for the observed lower prevalence of Hashimoto’s in individuals adherent to a Mediterranean diet may have been decreased oxidative stress. However, it is worth noting that the dietary content of iodine and selenium, which are known to influence thyroid autoimmunity, may also differ in Mediterranean compared with Western diets. In this study, higher intake of dairy and fish, both rich sources of iodine, were associated with increased Hashimoto’s risk. In large population studies, higher dietary iodine intakes are typically associated with increased thyroid autoimmunity.

It is reasonable to recommend a Mediterranean diet to patients to promote cardiovascular health.  However, it is premature to recommend this diet in order to reduce the risk for Hashimoto’s thyroiditis. A recent observational study in obese Italian adults (Zupo R, et al. Nutrients. 2020;doi:10.3390/nu12103173) concluded that increased adherence to a Mediterranean diet was actually associated with lower thyroid function. Larger controlled studies will be needed to better understand the relationship between adherence to a Mediterranean diet or one low in animal foods, and risk for autoimmune thyroid disease.

Section of Endocrinology, Diabetes, and Nutrition


Receive an email when new articles are posted on

Please provide your email address to receive an email when new articles are posted on .
We were unable to process your request. Please try again later. If you continue to have this issue please contact [email protected]